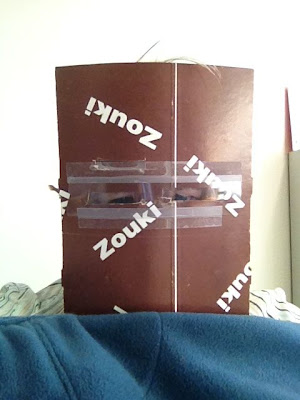 At work we have developed a new lunchtime sport in keeping with the occupational health and safety workplace exercise program. Our sporting activities do not involve running, aerobics, Tai Chi, martial arts or ninja moves across the ceiling. The rules of our sport are relatively simple: pelt your opponent with rubber bands until they squeal then protect yourself at all costs.

Many would argue that this is not a sport and I can see where they are coming from.  Rubber band pelting will never make it as an Olympic sport, even though it requires dexterity, exceptional hand - eye co-ordination, strength and deadly accuracy. It's a lot like archery without the bow.

The only drawback to this sport is the potential injuries. Weals, welts and the occasional drawing of blood are common, but the one injury that would draw a few raised eyebrows from the Workers Compensation Board is the taking of an eye in the quest for victory. That said, as responsible adults and mindful of the difficulty of the explanation on the claim form we decided that protective clothing was necessary.

A batman style cape with wings of steel is necessary for deflecting those stinging body shots. The manilla folders proved too flimsy to do the job. Headgear is also another important part of the armor. Pictured above is the Ned Kelly styled protective mask, made from a coffee cup holder with a double glazed eye panel made of toughened plastic. This prototype, still in the testing stage, is holding up well. Plans for this feat of engineering are available on request.

The health benefits of the sport are amazing. Ducking, weaving, bending to pick up ammunition. It keeps the mind sharp and the body supple. We have, at this stage, chosen not to have scoring system. Play should be spontaneous and opportunistic, not bogged down with rules and regulations. Exercise should be fun!

We are currently oiling the wheels of the office chairs and collecting the cardboard rolls out of the toilet paper.

Next week we start office jousting. 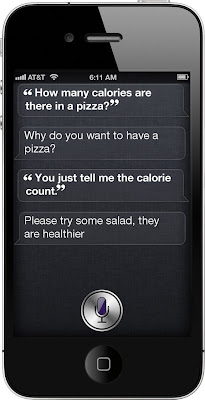 Our mobile phone contracts were up for renewal and we decided it was time to upgrade the old bricks and come into the 21st century. My partner wasn't all that fussed about what he got, but after using an ipad for the last 12 months I decided that I wanted an iphone. I was happy to upgrade to a basic model, but my partner decided that we needed the latest one with all the bells and whistles.

I was thrilled. Built in internet, apps, a decent camera - maps to make sure I would never get lost again. I was looking forward to Tiny Tower on the go. After setting my new ring and message tones I was ready to tackle the inbuilt personal assistant, Siri.

It can learn, the book told me. Work out who in your address book is who. Make those calls for you, set reminders, tell you what the weather is going to be. It even had a setting for English Australian. Bewdy Mate. Bonza. Life is good.

After a few simple experiments with Siri, I decided to show them at work how capable and impressive my new personal assistant was. I started with a simple command that I didn't think would stretch Siri's capabilities too far.

A simple request I thought. Siri beeped, the little icon spun around and her techno voice came back at me.

"I can't find Season in your address book."

"I don't understand soo ten. Would you like me to search the web for soo ten?"

It must be the accent. Maybe I'm not being Australian enough. I decided to test out Siri's capabilities on the understanding of the often unique Australian language. If she was going to be my personal assistant, she needed to lift her game. Once she had been through a thoroughly in depth language lesson, it should be a breeze for her. I uttered the most Australian thing I could think of.

"What am I doing? I'm waiting for something to do, Liz."

Hmmm. Obviously language is not a barrier and it understands my lingo quite well. Now for the test.

"'Season' is not in your address book. Would you like me to add it now?"

Nothing like a personal assistant to make you look like a fool at work. Siri hadn't done herself any favours by botching up this simple task, but all was not lost. I explained to my bemused colleagues that it probably had something to do with my accent and she probably needed some further training in that area. I then asked her to ring one of the other girls just to prove she wasn't a complete loss.

Ahh. The sweet smell of success. Siri had finally come through. Everyone was suitably impressed. I decided to push the envelope.

"Send Nat a text message. What would you like to say to Nat?"

Net and Season are laughing so hard they're crying. I try again, using a different tack.

"Season is not in your address book."

I think I'll put in a reminder to spend some time each day training Siri how to respond. I think I'll do it manually. Use the keypad like I did on my old phone. It's like that old saying 'If you want it done right, do it yourself.' Maybe I should think of her as a new employee - once she learns the ropes she should be invaluable. The potential is there - I only hope she makes it through the trial period. Technology - where would we be without it. 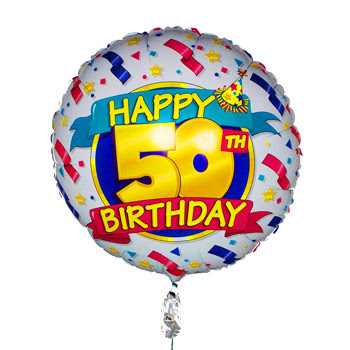 It was my partner's birthday not so long ago. A milestone birthday, the big five-o. A special birthday indeed, it's not every day one turns half a century old.

I wanted to get him something really special for this birthday. He's not fussed, he's happy with the socks and jocks year in, year out. The only trouble was, I had no idea what to get the man who is happy with socks and jocks. He doesn't wear jewelery, still hasn't read the last book I gave him 7 years ago. He tells me he has all the tools he needs and doesn't need anything special. Except maybe some socks and jocks.

So what does one get the man who has everything for his 50th birthday? Then I found it - the perfect gift. He used to have one of these until he fell on it and broke it. I caught him eyeing one off at a garage sale the other week. It has a thousand and one uses and multiple attachments for all those tight corners.  The one I got him was easy plug and play, with a 12 month warranty and in his favorite color. And just what is this perfect gift I hear you ask? 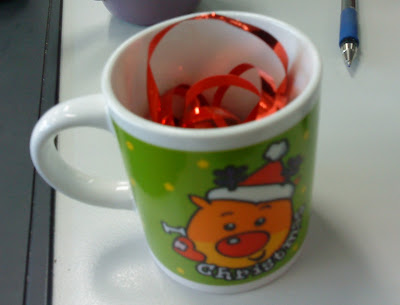 After my dismal effort with Christmas decorations this year, I decided to prepare for next year. Out went the old coaster and the green twine. In its place is an "I Love Christmas" expresso cup and shiny, new red twine.
Quite an upgrade from this year. I'll wrap this up and put it somewhere safe until next Christmas.
Hope I can find it again....
Posted by Liz at 20:32 No comments: 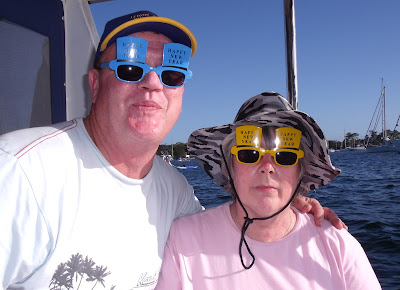 After sleeping through the last 5 years of New Year's Eve parties, this year we decided to do something a little different. Friends had the use of a houseboat and we decided to join them for an evening of fun, frivolity and fishing. As you can see, I was beside myself with excitement.

My fishing record is not remarkable. In 30 years I have caught 2 puffer fish, one when I was 17 and the other 2 years ago when I trapped it in shallow water and ran it down. If I make it three in a row after this trip I think I'll see about taking fugu lessons. After all, how hard can cooking a puffer fish be?

After a quick course on "how to bait a hook without the prawn flying off ", my line was in the water. And lo behold - a fish jumped onto my hook. My first real fish in 30 years - a mid sized trumpeter which they all said was no good for eating but was an excellent bait fish. That's when I realized I had another problem to deal with.

Getting it off the hook.

I would never make a serial killer. Not if you had to stab someone. Or remove a hook from their mouth.

I think my new career as a fisherman is officially over.
Posted by Liz at 13:41 No comments: 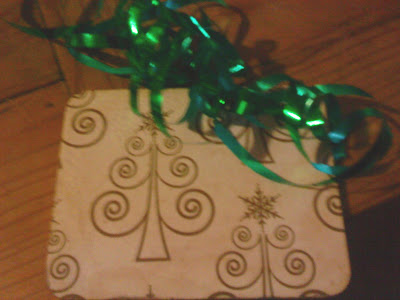 I have been unfairly accused of having no Christmas spirit. I find this hard to understand, after all, I went whole hog with the Chrissy decorations this year.

And here they are. A Christmas coaster that's been out since last Christmas and a sparkly bit of green twine. 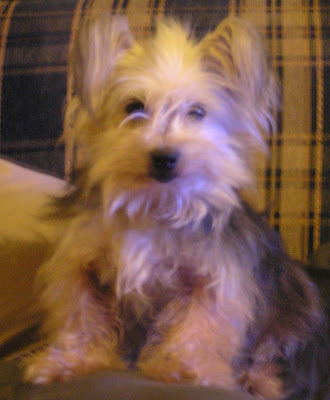 My little old dog was going on 17 and doing really well for her age. Although we had a few dementia and incontinence problems, diminishing eyesight and hearing not as sharp as it used to be she still had a terrific appetite and attitude to match. I envisaged she would make it well into the new year and would peacefully go in her sleep sometime in the future.

But it was not to be. Poor Katie suffered a prolapse. She was still her cheerful little self but there wasn't much the vet could do. At her age she wouldn't have tolerated the anesthetic so it was with a heavy heart we made the decision to put her down.

I've had her since she was 6 weeks old and she's been my constant companion during good times and bad. Loving, loyal and affectionate, she was the dog that comes along once in a lifetime. Irreplaceable.

Goodbye my little friend. I hope they have Schmackos in doggy heaven.
Posted by Liz at 10:07 2 comments:

Liz
Newcastle, New South Wales, Australia
My outlook on life - what makes me laugh, what makes me think. Life's a journey and I want to make the most of it.